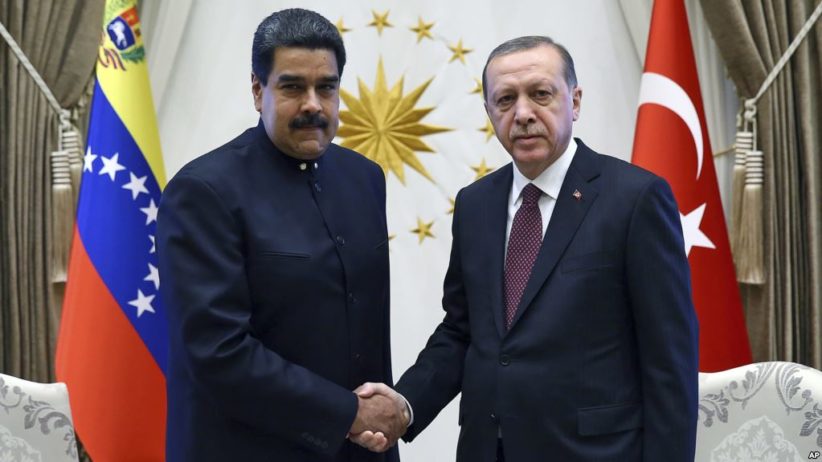 Turkey is Venezuela’s guest of honor at the 14th annual Venezuela International Book Fair, which runs through November 18. Speaking at an opening event last Thursday in Caracas, President Nicolas Maduro reportedly said, “I can now say I love Turkey. I love Turkey’s history, its people, culture, beauty, and diversity.”

Perhaps there is no single Turkish citizen that Maduro loves more than his political counterpart, President Recep Tayyip Erdoğan. Let’s examine a couple reasons these two authoritarian rulers are buddying up.

As Venezuela’s economy continues to spiral out of control, with annual inflation hitting 830,000% in October, the government is selling its natural resources to maintain political power. In addition to the world’s largest proven oil reserves, Venezuela’s government claims to have 8,000 tons of gold deposits in the southern, mineral rich region known as Arco Minero del Orinoco, which according to Bloomberg, would be the world’s second-largest behind Australia. For two years running Venezuela has led the world in selling off its gold reserves, reportedly selling 25 tonnes in 2017.

As sanctions from the United States and European Union continue to tighten the belts of government officials and businessmen, the country is looking to enemies of the West to conduct business. In Turkey they see a golden opportunity.

On November 1, US President Donald Trump signed an executive order expanding economic sanctions to gold exports from Venezuela, citing the Maduro regime’s corruption and economic mismanagement of Venezuela’s natural resources. Senior Fellow at the Center for Global Policy, Mehmet Ozkan, argues in Foreign Policy that these sanctions aren’t aimed at further crippling Venezuela’s authoritarian elite, rather they directly target the partners in Venezuela’s gold trade, including Russia, China and Turkey. It remains to be seen how Turkey will react to these sanctions, and how that may affect its relationship with Venezuela.

An Increasingly Common Enemy in the US

Maduro and his predecessor, the late Venezuelan President Hugo Chavez, have long declared the United States an enemy of their Bolivarian Revolution, and the US has been caught meddling in the affairs of other leftist governments in Latin America before.

But fellow NATO member Turkey has only more recently seen a deterioration in relations with the US. The most recent escalations include: increased tariffs by the US on Turkish goods; the refusal of Turkey to release pastor and North Carolina resident Andrew Brunson, claiming he is a spy; and the Turkish government’s claim that the US government was involved in a failed 2016 coup to overthrow Erdoğan.

Perhaps Maduro and Erdoğan find common ground in what they perceive as US aggressions against their regimes.

Speaking to Bloomberg in October, Hayri Kucukyavuz, a representative for Musiad, a business lobbying group aligned with the Turkish government, said, “If I had my way, Venezuela and Turkey would wed … Turkey has the businesses and the know-how, Venezuela the minerals and resources. Turkey and Venezuela have the same enemy, the United States, which attacks everyone.”

Relationships between international regimes are fragile and a convenient friendship at the moment may never materialize into a substantial alliance. Ozkan writes that there still remain some contentious issues between Turkey and Venezuela, most notably: Maduro’s support for Syrian President Bashar al-Assad, an enemy of Erdoğan; Maduro’s inability to close down schools in Caracas backed by a religious order responsible for the 2016 coup attempt in Turkey; and other to more general differences in language and culture.