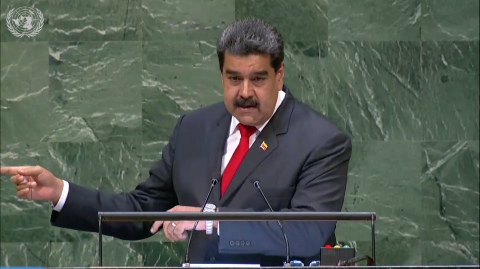 In an address at the United Nations on Wednesday, Venezuelan President Nicolas Maduro said that, despite their differences, he is open to direct dialogue with United States President Donald Trump.

His statement came just hours after Trump told reporters at the UN General Assembly in New York that he would be willing to meet with Maduro.

According to Reuters, Trump said, “I would certainly be open to it, I’m willing to meet with anybody. We’re going to take care of Venezuela, if he’s here and he wants to meet, it was not on my mind, it was not on my plate, but if I can help people that’s what I’m here for.”

Maduro has been seeking a meeting with the US President for two years, according to ABC News, and neither the White House nor Maduro’s camp have confirmed whether a meeting will take place.

In a surprise move, President Maduro arrived at the UN after previously threatening to skip the meeting citing his fears that he could be assassinated during his visit.

During his speech, Maduro also claimed that his government had found evidence that the US was involved in his alleged assassination attempt in Caracas on August 4 in which drones armed with explosives detonated while he was giving a speech. Maduro called on the UN to investigate the incident.

A day earlier, during his address to the UN, Trump officially announced new economic sanctions against Maduro’s inner circle, including his wife Cilia Flores, and asked the nations gathered at the assembly “to join us in calling for the restoration of democracy in Venezuela.”