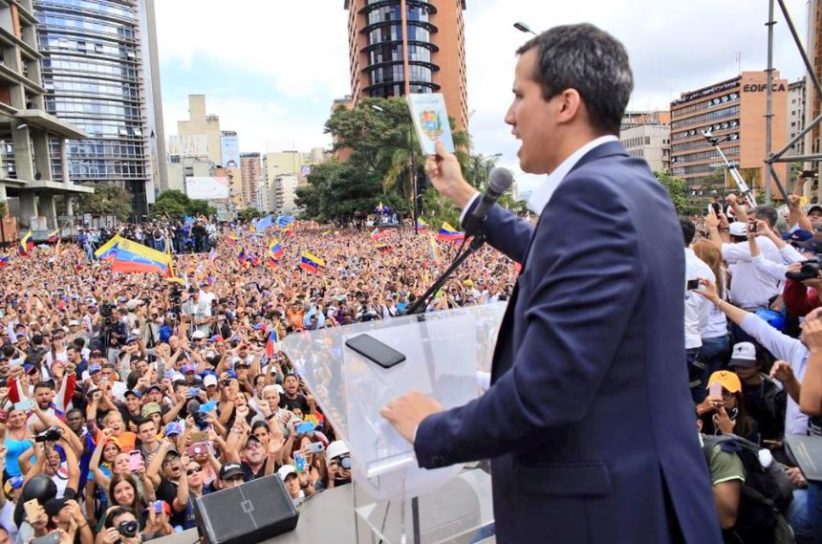 Image courtesy of @jguaido - Twitter.
This is a developing story and will be updated as soon as new information becomes available What we know: President of Venezuela’s National Assembly and opposition leader Juan Guaido has today, January 23, declared himself head of state amidst chaotic protests in Caracas. What’s behind this? Large-scale protests sparked by the re-inauguration of President Nicolas Maduro on January 10 have been escalating since Monday, January 21, culminating in an opposition march today to demand the “usurping” of Maduro. So far, the BBC reports that four deaths have occurred overnight as a result of protests and individuals continue to clash with police forces. How has the international community reacted? At the time of writing, the following countries have declared their official recognition of Guaido as interim president. Colombia – Ivan Duque Peru – Martin Vizcarra Argentina – Mauricio Macri Brazil – Jair Bolsonaro Canada – Justin Trudeau Chile – Sebastian Pinera Costa Rica – Carlos Alvarado Quesada Ecuador – Lenin Moreno Guatemala – Jimmy Morales Paraguay – Mario Abdo Benítez United States – Donald Trump What is Maduro saying? Labelling Trump’s move to recognise Guaido as president a “very serious irresponsibility,” Maduro has decided to break diplomatic relations with the United States, ordering all US diplomats to leave the country within 72 hours . Maduro is currently speaking from the balcony of the Palacio de Miraflores presidential residence, Caracas. What is Guaido saying? After swearing “to assume all the powers of the presidency to secure an end to the usurpation,” Guaido has since issued a statement via Twitter countering Maduro’s order for US diplomats to leave the country. What does the law say? Article 233 of the Venezuelan Constitution declares that the President of the Republic will be considered to have failed completely in their responsibility as leader of the Republic in the case of: “His death, his resignation, or his dismissal decreed by a sentence from the Supreme Court of Justice. Also valid in the case of physical or mental incapacity certified by a medical board chosen by the Supreme Court of Justice and approved by the National Assembly.” “If this occurs, then there must be a universal election within 30 consecutive days. While this process in underway, the President of the National Assembly will hold the role of President of the Republic.” Which countries are supporting Maduro? Bolivian President Evo Morales has declared his solidarity with Maduro via Twitter. Uruguayan Minister of International Relations, Rodolfo Nin Novo, told Sputnik Mundo that “Uruguay will carry on recognising Maduro as a legitimate president, and therefore will not be recognising the opposition MP Juan Guaidó as the president in charge of Venezuela.” He added that an official answer from Uruguay will be made public tomorrow or the day after (Thursday Jan. 24 or Friday Jan. 25) Cuban President Miguel Díaz-Canel Bermúdez posted on Twitter today ratifying his “unmoving support” for Nicolas Maduro’s leadership and condemning the United State’s attempt to “impose, through a coup d’etat, a government servile to the US. Reuters has reported that Mexico does not support the OAS’ decision to recognise Guaido as Venezuela’s interim president. This is in line with new president Andres Manual Lopez Obrador’s policy of no interference in internationa affairs. The Russian Foreign Ministry released a statement today, Thursday Jan. 24 saying that “Venezuelans alone have the right to determine their future,” and condemning any “destructive foreign interference” as “completely unacceptable.” Reuters reported that the Kremlin stated that Maduro was the “legitimate” president of the country. Reuters reported that China‘s Spokesperson Hua Chunying expressed China’s support for Venezuelan government to protect the country’s “sovereignty, independence and stability.” “…I want to emphasize that outside sanctions or interference usually make the situation more complicated and are not helpful to resolving the actual problems,” she added. No comment from: Honduras, Panama, France, Nicaragua, Uruguay. Reactions on Twitter:  Miami Herald columnist Andres Oppenheimer: “Venezuela’s Maduro says he’s breaking ties with the U.S. But will he dare breaking ties with Brazil, Argentina, Colombia and several other countries that also recognized Juan Guaido as Venezuela’s president? I doubt it.” Venezuelan Minister of Defence Vladimir Padrino: “Despair and intolerance impinge on the nation’s peace. The country’s soldiers do not accept a president imposed in the shadow of dark interests nor self-proclaimed outside of the law. The National Bolivarian Armed Forces of Venezuela defends our Constitution and guarantees our national sovereignty.”   Donald Tusk, President of the EU Council:“I hope that all of Europe will unite in support of democratic forces in #Venezuela. Unlike Maduro, the parliamentary assembly, including Juan Guaido have a democratic mandate from Venezuelan citizens.” Sir Alan Duncan, UK Minister of State for Europe and the Americas: “I am following the situation in #Venezuela carefully. Juan Guaido has widespread support among Venezuelans. The political crisis has gone on long enough. Now is the time to find a way forward that leads to a peaceful solution for all Venezuelans.” With reporting by Frances Jenner and Sophie Foggin.