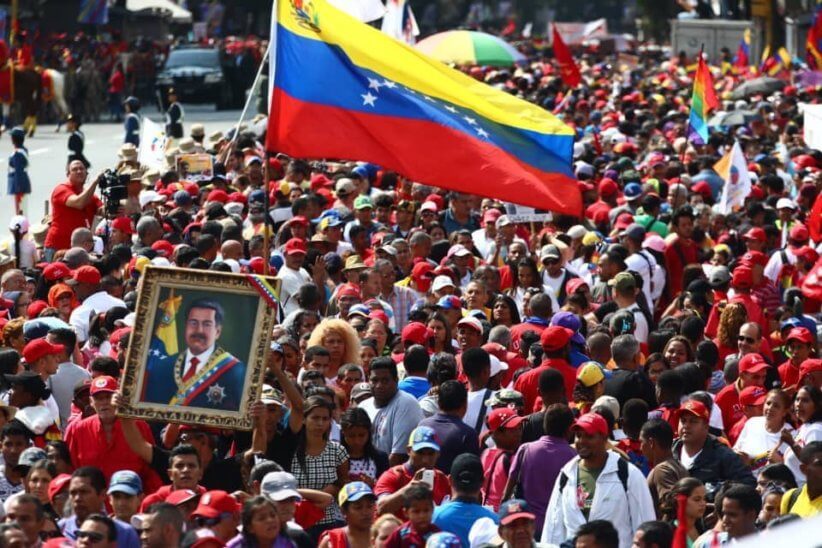 Nicolas Maduro’s inauguration took place yesterday January 10, and the Venezuelan leader starts his second mandate, which will run until 2025. However, in contrast to his first rise to presidency in 2013, yesterday’s inauguration was attended by meagre crowds and scarce international representatives.

What was considered controversial was the fact that Pope Francis sent a representative of the Vatican to attend the event, despite the fact that just the day before, the Venezuelan Episcopal Church had denounced Maduro’s regime as illegitimate. This also comes after 20 ex-Latin American leaders sent an open letter to the religious leader criticizing his comments on the crisis in Venezuela. They felt that it was wrong to tell Venezuelan citizens to find “harmony” without addressing the alleged human rights abuses in the country.
Despite causing a rift between the Venezuelan church and the Vatican, reported Infobae, the event was attended by Monsignor George Koovakod, Chargé d’affaires at the Vatican. In his 80-minute speech after being named president, Maduro thanked Koovakod for his presence, calling it “brave.”

Despite many countries, both in the region and worldwide, dismissing Maduro’s rule as illegitimate and boycotting his inauguration, sources told La Nacion that it was unlikely that the Pope would have failed to send a representative for such an event.

“Historically, the Vatican has never cut ties with any state,” explained one source, adding that the Holy See “always looks to leave a door open for dialogue, and that, by sending a low-level presence to the ceremony, in some way it wants to clearly indicate its displeasure with what is happening in the country.”

The U.S. condemns #Maduro’s illegitimate usurpation of power and urges those who support the Venezuelan regime, including security forces sworn to support the constitution, to stop enabling repression and corruption. The time is NOW for a return to democracy in #Venezuela.

In response to the letter criticising his comments on Venezuela and Nicaragua, the Pope clarified that he does not wish to “interfere in the existence of states,” but instead to “put ourselves at the service of every human being,” and “work to favour the development of pacifist and reconciled societies.”

“In this light,” added a source to La Nacion, “[that of] good, of dialogue, of no violence, of the building of bridges, not walls, then it is necessary to have the presence of a Vatican representative at Maduro’s inauguration.”

However, some countries have taken more drastic measures, such as Peru and Paraguay, who have cut diplomatic ties with Venezuela and closed down their embassies in the country. Yesterday, January 10, the Argentine government released an official statement detailing the sanctions they would apply to the Caribbean country.

However, despite Maduro claiming in his speech that 94 countries were present at his inauguration, it was a stripped down diplomatic group that attended the ceremony, with only 17 presidents, vice-presidents and diplomatic representatives actually in attendance.

Of those present were the presidents from Bolivia (Evo Morales), Cuba  (Miguel Díaz-Canel), Nicaragua (Daniel Ortega) and El Salvador (Salvador Sánchez Cerén), as well as the vice-presidents of Turkey (Fuat Oktay) and Suriname (Ashwin Adhin). The prime minister of Belarus (Siarhiej Rumas) and his counterparts in St Vincent and the Grenadines (Ralph Gonsalves) and Saint Kitts and Nevis (Timothy Harris).

Antigua and Barbuda, Mexico, the Dominican Republic, Russia, Grenada, China, the Sahwari Republic and Iran sent diplomatic representatives. Also present were representatives from South Ossetia and Palestine, but these countries are not recognised by the international community.

The New York Times reported that in contrast to the huge crowds that gathered to meet him after Maduro’s first inauguration in 2013, there was only a small group “waving tiny flags with little enthusiasm.”

Since Maduro came into power, the country has plunged into an economic and humanitarian crisis, with severe shortages of basic necessities and huge inflation. Maduro assumed power on Thursday with inflation at 1,689,000%, but the International Monetary Fund have estimated that inflation could rise to 10 million percent by the end of this year.

The Inauguration of Venezuelan President Nicolas Maduro according to Twitter