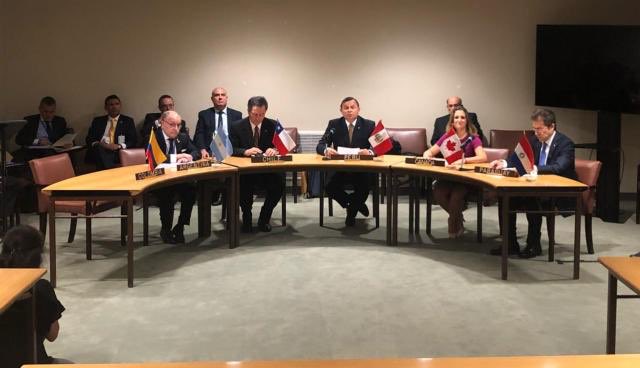 After the UN General Assembly, six countries signed and presented a formal request for the International Criminal Court (ICC) to open an investigation into the alleged crimes against humanity and human rights violations taking place in Venezuela.

Argentina, Chile, Colombia and Paraguay were the first four countries to express their plan to undertake such a measure, and now Peru and Canada have added their signatures to the document that was presented to the ICC on Wednesday Sept. 26.

Venezuelan authorities denied access across their borders in order to carry out their investigations, however information was collected through interviews with victims and witnesses. The ACNUDH report contained 150 interviews with those directly involved in crimes as well as representatives of civil society, journalists, lawyers, doctors and university teachers.

The reports suggested that Venezuela was carrying out such crimes as “assassination, being imprisoned or other forms of removing physical liberty, torture, rape, persecution of a group or collective with its identity founded in politics and forced disappearances.”

The ACNUDH report also added that there was systematic action taken against boys and young men between the ages of 15 and 30, which involved them being taken away from their homes without justification in order to accuse them of things they haven’t done, or killing them under the assumption that they are resisting.

This recent document sent to the ICC is unprecedented for numerous reasons. First, this is the first time since the ICC’s creation by the Rome Statute in 2002 that member countries have asked lawyers to investigate another member country. It is also the first time that the complaint has been brought to the ICC by heads of state and governments, as it is normally presented by international human rights groups.

It is also important to make clear that the accusations are not against the Venezuelan state as a whole, highlighted Juan Navarrete to BBC Mundo. Navarette is the ex-representative of Colombia at the Inter-American Institute of Human Rights.

“Although it talks of an accusation against Venezuela, it is not against the Venezuelan state but rather against those indicated to have carried out human rights abuses and crimes against humanity,” Navarrete said. “Additionally, although they mention Maduro, the investigation will affect the entire chain of command that has made these events possible.”

In February, the ICC opened a preliminary investigation into whether Venezuela was committing any international crimes when ex-general attorney of Venezuela Luisa Ortega left the country saying that she had felt harassed by Maduro’s government.

Normally, once a preliminary investigation begins, the ICC gathers evidence and identifies a suspect for the crimes. The case then goes to Pre-Trial, where judges decide whether there is enough evidence for ir to go to a full judicial trial. The ICC website states that if the suspect is not arrested or does not appear, then although legal submissions can be made, the hearings cannot begin.

However, BBC Mundo spoke to Fernando Fernández, a professor of International Penal Law at the Central University of Venezuela, who said that due to the unprecedented way the investigation has been requested, the case may skip the Pre-Trial period.

“There is a judicial interpretation that says that in this case it wouldn’t be necessary to go to Pre-Trial because of the existence of the petition from the states,” he explained. “However, this is something that is going to become clearer in time, because it is the first time that it has happened.”

If the case skips Pre-Trial, then a formal trial will be opened where the prosecution must prove beyond reasonable doubt that the accused is guilty. In either case a lot of time will have to be spent collecting proof, recording statements from witnesses, questioning suspects and even exhuming bodies if necessary. If both parties collaborate in this then it could happen quite quickly, but if this is not the case the process could stagnate for years.

In response to the actions of the six countries, Maduro has said that there is an international conspiracy to overthrow him and his government after OEA Director Luis Almagro raised the idea of military intervention in Venezuela. He has also made news this week by accusing Colombia, Chile and Mexico of playing a part in the alleged terrorist attack against his life on Aug. 4, and accusing Chile’s government of being “muddied” by the events.

Maduro is becoming increasingly defensive as surrounding countries are becoming more vocal in their repudiation of his leadership. The South American continent has for the past four years borne the brunt of the social and economic crisis by allowing the entry of hundreds of thousands of fleeing Venezuelans into their countries.

“We are going to commit ourselves completely hoping that this ICC accusation will finally be an effective and efficient tool to give back to our Venezuelan brothers a government who looks after them,” stated Paraguayan Foreign Minister, Luis Alberto Castilgioni.

“To stay unmoved, indifferent or unconvinced before this reality could have indications of complicity in the region,” he said, adding that “we are not going to be complices.”